This year was my daughters second one dancing at the Performing Arts Centre (PAC). When COVID-19 closed the studio in March, the Davenport sisters immediately turned to virtual classes and a week later…PAC danced! When our county began to open up in May, the Davenport sisters strategically worked out a plan to keep everyone safe, re-opened the studio and…PAC danced! After weeks and weeks in isolation, dance class was the first place we returned and our hearts filled with joy and…we danced!

As June approached and the dates of the annual recital inched closer, it seemed next to impossible to hold an event of such magnitude, let alone one that loved ones could safely attend. Would PAC even have a recital this year? How will they ever orchestrate such a production when auditoriums and theaters across the country are closed and there are social distancing protocols in place? Without fail, the Davenport sisters got to work and with a bit of creativity and tons of grit, PAC held their forty-sixth dance recital on June 20, 2020 and…PAC danced! Nothing can stop PAC from dancing, not even COVID-19!

How Did They Do It?– They constructed a stage in PAC’s parking lot, laid out a detailed seating diagram, to ensure safe social distancing, and held nine separate showtimes throughout the day that consisted of eleven numbers each. Each show was live-streamed on-line for those who couldn’t come in person.

From the Noteworthy Dance Mom- As a second year dance mom I wasn’t alone in feeling nervous about the recital this year. COVID-19 made the recital challenging for everyone, even the experts! My daughter and her adorable class did a sweet tap routine to, “If I Knew You Were Comin’ I’d’ve Baked a Cake.” My daughter was fantastic and I’m so very proud of her. Having Ms. Tracy Davenport, PAC owner and artistic director extraordinaire, made for an amazing PS4 dance year! As a second year dance mom, I was faced with new costume challenges like attaching shoe bows and a hair piece. My prayers were answered when my mom and dad appeared at our doorstep, unannounced, just minutes before it was time to leave. Pops helped me style my daughter’s hair and successfully attached the head piece in just the right position. I am proud to say we survived our second dance recital, although it will go down in history as the one we didn’t see coming!

Unlike a majority of American women I never took dance lessons as a child. My parents offered up the opportunity but I was an extremely shy little girl and unless I had a BFF to go with me I refused to try anything new. So when my little one was three I asked her if she wanted to take dance lessons at a real dance studio. My daughter is brave and outgoing and only a wee bit shy, so unlike her mommy, she enthusiastically said “YES” and I became a “dance mom.”

The Studio- Fully unaware of the local dance scene I enrolled my daughter at the nearest studio, a mere two miles from our house! Little did I know that the Performing Arts Centre is a premiere dance studio in the Saint Louis area and has produced internationally known performers. My daughter was blessed to have Ms. Debbie Davenport (one of the owners) as her teacher and we had a drama free year of dance until the big recital edged near. That’s when I faced a wave of uncertainty as I navigated my new role as “dance mom.”

The Make Up- The thought of applying eye shadow and lipstick to a four year old scared the begeevees out of me! So I turned to my mommy mentor for make-up advice. She told me what she used for her daughter’s recent recital and explained in great detail how she applied it. I took copious notes and traveled to three different stores to get what we needed! But then my daughter flat out declared that she had no plans on wearing make-up. She would only wear strawberry flavored lip stick! So I decided to do a trial run with my dad by my side (he is an artist who is skilled at applying make-up) Simply suggesting that she put on make-up led my little one to a giant meltdown so I said, “Why don’t you watch while Pops applies make-up to mommy?” After the transformation I emerged with big red lips and dark purple eyelids. She still refused and I went to bed praying for a miracle. 

The Dress Rehearsal- On the morning of the dress rehearsal I had everything laid out (make-up, ponytail holder, hairspray) prior to greeting my little dancer. She awoke with snot dripping from her nose and I just didn’t know how we were going to make it through the morning! But to my surprise my daughter was cooperative and while she played a game on my phone I successfully applied foundation and eye shadow to her precious little face. Then came the lipstick and a bit of resistance but after bribing her with a stuffed pup she had her eye on at our local supermarket, the lips were done! Another $15.99 to unlock hidden ponies on the “My Little Pony” game she was playing on my phone and her hair was beautifully styled and sprayed with hairspray. I became “that mom” and made promises through sheer desperation, but learned if I was brave enough to become a dance mom I had to go all in and never look back!

The Dressing Room- My daughter’s Godmother came into town for the recital and she accompanied us behind stage. I was immediately overwhelmed as we navigated through a maze of mother’s doing hair, applying make-up and fixing costumes. While little girls, giddy with excitement, ran through a sea of sequins and hairspray in search of their instructors. “Jennifer, I think I’ll go out and sit with your family,” said my daughter’s Godmother. The thought of being left alone with all of the chaos and commotion made me nervous. As the blood drained from my face she saw the horror in her proposal. She gently laid a reassuring hand on my shoulder and said, “I’m sorry I didn’t prepare you for this. It’s ok, I’ll stay.” It was, perhaps, one of the greatest gifts she could have given me. As she applied red nail polish to my little hula baby’s toes, I was overcome with emotion. For at that moment I realized Aunt Kay Kay (what my daughter affectionately calls her Godmother) had traveled from Ohio to Missouri not only for my daughter but for me! 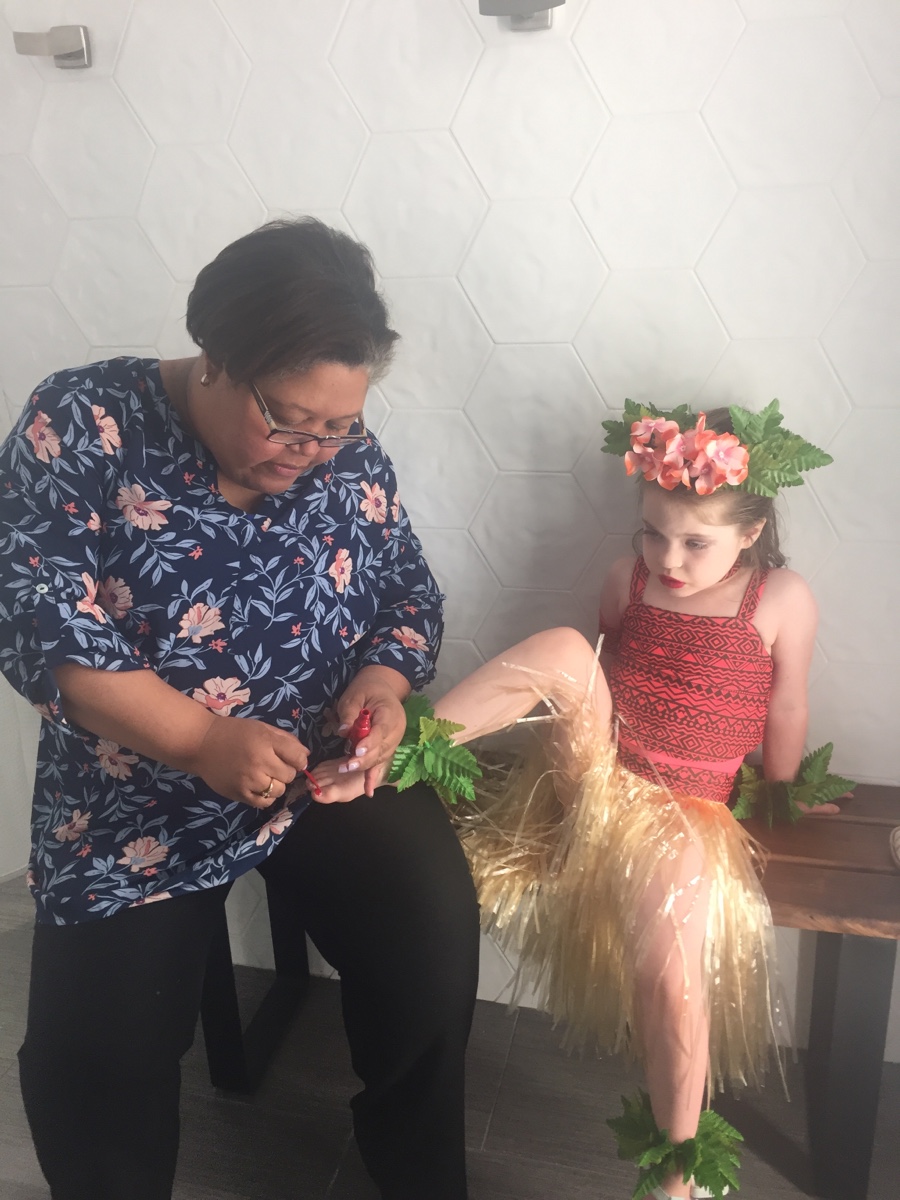 The Performance- My daughter danced on the second recital night. Since the studio is bursting with talent the owners split the recital into five three-hour performances on various nights. The competition teams and dance company perform every night, giving the audience a nice sampling of dance styles and abilities through a variety of age groups. My daughter’s class were the “babies of the night” and when working with three and four year olds you never know what will happen! I was surprised how confident my daughter was on stage. She wasn’t born a dancer but she knew the routine and did every step without missing a beat! Her headpiece came off during the end of the dance (an epic beginner dance mom fail) but like a pro she didn’t stop and pick it up, instead she continued on as if nothing happened. She was one of the only girls who remembered to blow a kiss at the end and when I picked her up backstage I could tell she was proud of herself and her accomplishments!

Let’s Hear it For the Boys and the Girls and the Adults!– If you’re reading this thinking “I’m a boy mom so I’ll never be a dance mom,” then Shame on You! Three of the seven graduating seniors at my daughter’s dance studio are boys! Dance doesn’t discriminate, it doesn’t require prerequisites or prior experience. Everyone is welcome! Boys, girls, even adults! A quality studio will have an appropriate class for everyone! In fact, there was an adult only number that highlighted an introductory tap class. Although far from professional, these men and women were filled with joy and radiated confidence, reminding me that life is filled with taking risks and we should all be open to new adventures!

Dancing Through Life!– I don’t know how long my daughter will continue dancing. She may never make the competitive team or dance professionally but in one short year dance has taught her lessons to last a lifetime. Dance has improved her focus, discipline, gross motor abilities and cooperation skills. She has learned to follow directions, watch her peers, wait her turn and most importantly, what it takes to be part of a team! She took her responsibility on stage seriously and was genuinely upset when one of her peers chose to “do her own thing” during the dance instead of following the practiced routine. Although not unusual at this age, my daughter called it “disappointing” and asked me, “Momma did you see the friend in my class who was not cooperating!” It was an important life lesson. But whether they followed the routine or not the girls all accomplished something many adults have never achieved. They fearlessly got up on a huge stage, faced the blinding lights and joyfully danced in front of a packed audience. And at that moment I was proud to call myself a “dance mom!”