My mom and dad met in 1961 during their junior year of high school. My mom told me she had her eye on dad from the start and got his attention by first becoming friends with his cousin. (You have to be careful with the quiet ones, you never know what they might be orchestrating) Once they were formally introduced they hit it off and they have been together ever since.

Together As One- It occurred to me that besides mom’s older brother and a few of dad’s grade school friends, the majority of the people at their 50th wedding anniversary party have never known Keith without his Janet or Janet without her Keith. Throughout their 50 years of marriage they have spent only a handful of nights a part from one another. Besides a few nights away for work related conferences and the work trips dad accompanied me on during the early part of my pregnancy, my mom and dad have spent a mere dozen or so days without seeing each other. That’s 18,250 days minus a few but not including the seven years they knew each other before they got married! I guess it’s safe to say they like being together!

What Makes a Successful Marriage? Two people can have a successful marriage when they have a strong faith and similar tastes and interests. Mom and dad are active members in their church, they are both educators, they enjoy attending live theatre and they are Beatles fans. In 1965 they went on a date to see the Beatles in concert at Busch Stadium! But a couple can only happily celebrate 50 years of marriage when they compliment each other and that is one area where my mom and dad have excelled. In fact, neither of them would have graduated from college without teamwork, dad completing all of moms art for the elementary teacher projects and mom editing (well, let’s be honest, rewriting) most of dad’s papers for him. Mom is the quiet reserved part of their duo while dad is the outgoing one! They both collaborated in raising me, worked together to care for aging family members and over the years have created some fabulous holiday traditions and celebrations that they enjoy sharing with others.

The Engagement- On a humid evening in the middle of July 1967, my parents went to The Muny in Forest Park to see a production of Funny Girl. They both enjoy musical theatre and were fellow thespians in high school (dad behind the scenes painting the sets and mom supporting the production as a member of the chorus) Before the show began dad proposed to mom in front of the magnificent Muny with the picturesque pond and gazebo as a backdrop. Mom said yes and the show Funny Girl with the popular song People quickly became “their” show. A year later on June 29, 1968, the two were married in front of family and friends and today they are celebrating 50 years of marriage! 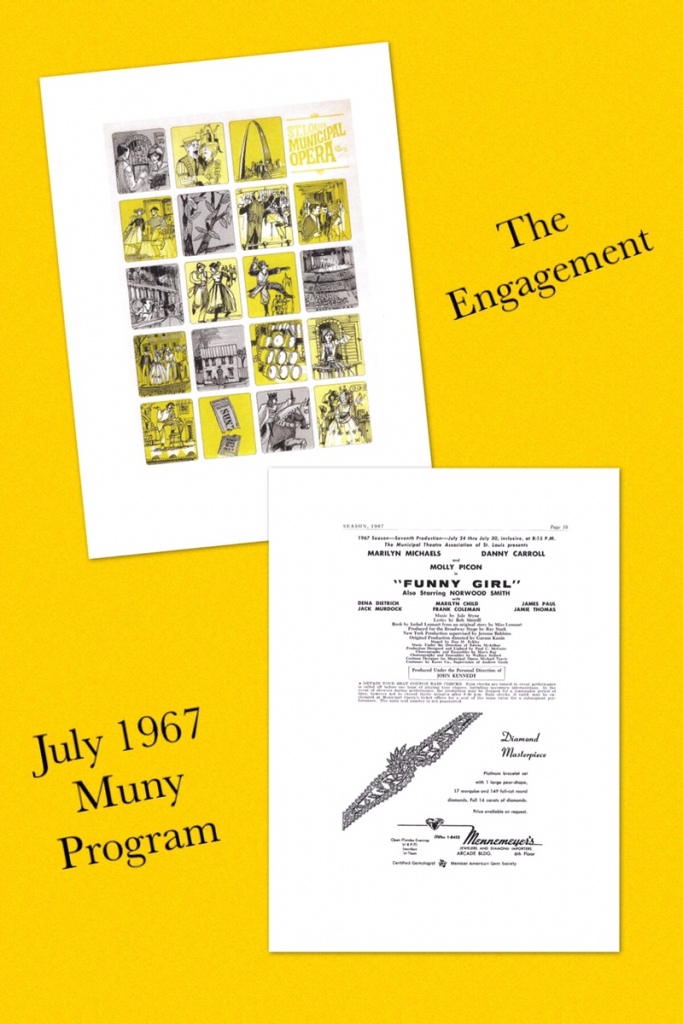 A Marriage With a Strong Foundation- What do you give a couple who has everything they could possibly want? Well, my husband and I thought about it and decided to get them a brick to commemorate their 50 years of marriage. A brick is strong, just like their marriage. Life would be easy if it was simply filled with celebration but during mom and dad’s 50 years of marriage the two have been faced with loss and have experienced some struggles. But even through times of uncertainty they have supported each other, loved each other and their marriage remained as strong as this brick. But this isn’t any ordinary brick just as their marriage is anything but ordinary. This brick is a commemorative brick that will be placed at The Muny in Forest Park just a few feet from where my parents got engaged 51 years ago. The Muny is celebrating 100 years this summer while mom and dad are celebrating their 50th so there is a lot to celebrate! And the inscription reads…

Let’s raise a glass to Janet and Keith in celebration of 50 magical years of marriage. Blessings for many more! You are truly golden together.

Portions of this article were part of a speech/toast I read to my parents at their 50th wedding anniversary party.