The eight and a half years I worked as a full time educational consultant for McGraw-Hill I earned countless airline miles traveling for my job. I became a road warrior and conquered airport security lines, lost luggage, annoying passengers and delayed flights with ease. When it was my turn to put my items in the bin in the security line I had everything ready and was walking through the x-ray machine before the person behind me had time to take off their shoes! Early in my career I had issues with lost luggage but I was schooled rather quickly and learned to pack light and fit everything in a carry-on bag. Although I encountered crying babies, passengers who wanted to talk while I wanted to sleep and people talking a bit too loudly on their cell phones (lady, I don’t need to hear about your recent visit to the doctor) I learned to ignore the background noise at the airport and in the airplane and settled comfortably into my own little world by putting in my earbuds and listening to my favorite tunes.

During my infertility struggles air travel became emotionally painful. The airport is brimming with babies and young children. Ask anyone who has struggled to have a child and they will tell you how painful it is to see babies, pregnant ladies and happy families while you are dreaming of a baby of your own. And when you are traveling for work, alone and tired, these feelings of sadness and hopelessness are merely magnified.

When I became pregnant with my miracle baby I continued to travel by air for my job. My dad traveled with me during my first trimester because I was taking progesterone and heparin injections. I can’t pass a family assisted restroom at the airport without thinking about the time we both squeezed into one of those restrooms so my dad could help administer my injections. After the first trimester we all breathed a little easier, I no longer needed injections and I began to travel solo once again. This is when I realized along with the rude people there were plenty of kind and helpful people at the airport as well. I never had a problem getting help putting my carry-on in the overhead bin, I recall having a gentleman offer his seat to me in the crowded gate area and for the most part people didn’t grimace as much when it took me a bit longer to waddle down the aisle of the airplane.

When I resigned as a full time educational consultant you would think I would stay far away from airports and airplanes. Instead, I decided to take my little one on multiple air travel adventures within her first year of life. Her first flight was to Atlanta, GA when she was a mere 9 months old. She was a picture perfect traveler and at the end of our first flight several passengers commented they didn’t even know there was a baby onboard!  I declared that trip a triumphant success! A longer trip to California followed a month later and a return trip to Altlanta occurred shortly after her first birthday. Our little lady was becoming an expert traveler just like her mommy. She wasn’t walking on any of these trips and was small enough to comfortably cuddle up in my lap for a short nap. She was cooperative on each and every trip and I even successfully changed her diaper in the tiny airplane bathroom. I wish I could impress you by saying I took her on these trips by myself, but sadly, I am not brave enough to travel solo with her just yet, so we always had family traveling with us.

Now that my daughter is 19 months old I decided it was time to take another trip on the airplane. This time we were traveling to Columbus, OH. I briefly thought about braving the trip with her by myself but my baby is now a toddler and I knew air travel would not be the same, so I chickened out and invited my parents to join us. This trip started out with a tantrum when I had to take her out of her stroller to go through security but that was the only meltdown. Thankfully the flight ended successfully due to the free episode of Mickey Mouse Clubhouse we watched on my tablet and the purse full of snacks provided by Nana.

Since we all survived the trip to Columbus  without incident, I decided to brave a trip to Minneapolis. My mother in law was my accomplice on this trip. The trip started out pleasantly with a smiling toddler going through security. Maw Maw bought us a pretzel at the airport and after finishing our snack we were ready to board. With tablet in hand I was looking forward to putting yet another successful trip in our travel log. That’s when we got the announcement that our flight was…delayed! Not a problem, we can survive a small delay, and passed the time by taking a walk through the concourse. My daughter became friends with a giant red m&m and enjoyed waving to waiting passengers as we walked around. We got back to the gate to discover we were further delayed so we all went to get something to eat. After eating all three of us were getting tired and anxious to arrive at our destination. My mother in law took my daughter for a ride in her stroller and she fell asleep. After a 4 1/2 hour delay our plane had arrived and we were finally ready to board our flight to Minneapolis. Mickey Mouse Clubhouse was a lifesaver on our last flight so I was ready to get my tablet fired up only to discover that the wifi wasn’t working! Since she had grown tired playing with all of the toys and books I had packed, she passed the time playing with a cup of ice. Sometimes it’s the simplest things that entertain a toddler. Somehow we all survived that flight and made it to Minneapolis hours after my daughter’s bedtime. My daughter was a trooper and was a better traveler than most of the tired adults on that flight! 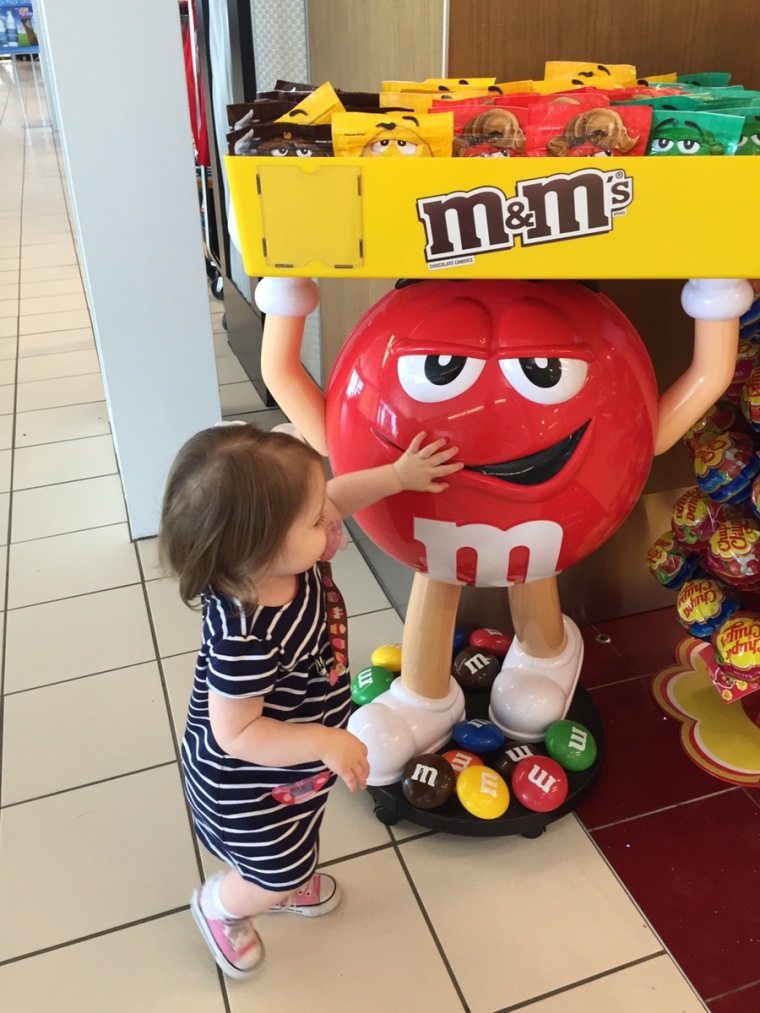 We were all looking forward to a smooth flight home but unfortunately we encountered yet another delay. We passed the time quickly by getting something to eat and playing in the unique playground inside the Minneapolis airport. All airports should have a playground where children can burn off energy, get some exercise and have a safe place to explore before boarding a flight. In fact, we were having so much fun at the playground we almost missed our flight home! We didn’t get to sit next to Maw Maw on the plane ride home but we did have our friend Mickey Mouse to keep us company. My daughter was content after having played on the playground and didn’t miss playing with the cup of ice which was good since beverage service was suspended due to some turbulence.

I know anyone who travels regularly has horror stories about lost luggage, delays and interesting passengers they have met along the way. I have more than a few to share myself. Now that I am a mother I have added a new chapter or two to my travel log, traveling with a baby and now a toddler. Traveling with your mini me certainly makes for an interesting and entertaining trip! Perhaps I am documenting these early adventures because deep down I know, in the not so distant future, there will come a time when my daughter will take flight and embark on her first solo flight, filling pages of her travel log without me. And when she does she will travel with ease because she learned from one of the best road warriors in the world!